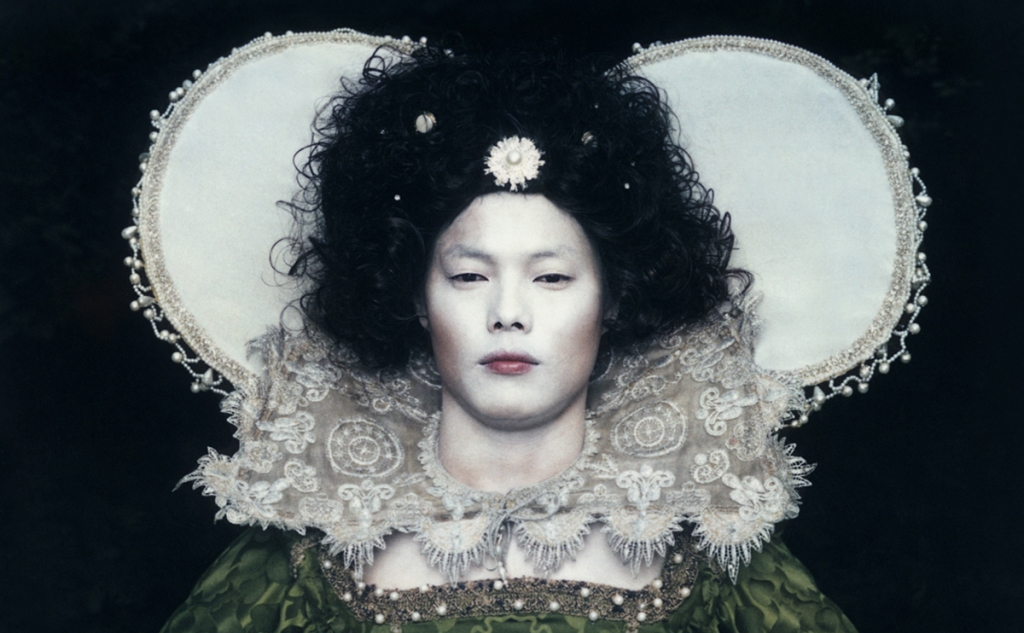 In English, the term ‘culture’ encompasses a wide range of social behaviours, aesthetic expressions, beliefs, customs, laws and habits. It is what defines the way of being of a group and its shared sense of belonging. It is complex, nuanced and pervasive. For those from another culture is marks difference in a profound two-way recognition of the immiscibility of insider and outsider.

From afar, the Korean artist Chan-Hyo Bae had been fascinated by the cultural history of Britain. But, when he moved to London to study at the Slade School of Art, it was that same culture that made him feel isolated and awkward. This experience led him to create four interconnected series of photographic tableaux under the collective title of ‘Existing in Costume’. In these, he uses the trappings of British cultural history as preserved in the oil paintings of long ago to construct ironic images that situate the ‘alien’ Asian man in the midst of Britain’s aristocratic past, often assuming the female role in the process.

Chan-Hyo Bae’s images draw on art history not simply for its aesthetic effect but as a form of research; a journey of unfolding discovery. Yet, while each series leads him to fresh insights, it also raises new questions as the onion skins of culture are peeled back one by one.

When did your interest in photography begin?

I was born in a factory complex in South Korea in the Seventies. I have always been interested in images. When I was a child, I would lie on the floor of the factory and draw on the concrete with chalks. And I remember feeling a strange excitement as I watched the sunlight slanting through the broken window frames flicker across my drawing.

When I was older and choosing what to study at university, my memories of childhood made me choose photography. I decided I would be a photojournalist and, after I left university I went to work for a newspaper. However, I wanted to become an international photojournalist and be active in the world. I had then a vague admiration for the West. As a result, I chose to study in the United Kingdom.

After arriving on Britain my ambitions changed, and I enrolled at the Slade School of Fine Art in London. There, I began to learn what art was. It was a shock! Much of what people were making seemed pointless to me, though my professor, John Hilliard, was very supportive.

One night, after an unsuccessful attempt to make work, I passed a fruit stall outside one of the London Underground stations. The stall was neat, but beside it was a pile of discarded fruit packaging boxes. I wanted to make a picture about my feelings without even knowing quite what they were. I set up a large 4×5 camera, and focused on the pile of rubbish. I asked a passer-by to press the shutter for five seconds when I gave the word. He agreed. I went into the pile of garbage, took off my clothes and sat down. It was my first self-portrait and later I wanted to find a reason for my actions on that cold winter night.

And what was the reason?

I began to think about the social position of Asian men in Western society. I realised that, as an Asian man in London, I felt alienated and judged as somehow inferior in Western eyes. I began taking self-portraits, standing in front of the camera and looking back at the world. As I did this, I became more aware of the way the image of the West that attracted me… and yet the attitudes in the West that now made me feel uncomfortable were part of the same larger phenomenon.

You then went on to make the various series that together constitute the larger body of work called ‘Existing in Costume’. Why did you choose this art-historical atmosphere in order to communicate your ideas?

I came to realise that the West that I had imagined was not here, it was in the architecture and the oil paintings of the past, but not the living city around me. It was that historical past that I had admired and on which I had based my fantasies of Western culture.

At the same time, I came to understand that attitudes of cultural superiority and cultural discrimination are often expressed as historically defined rights of cultural ownership. It was these attitudes that made me a stranger – a kind of violence of not being permitted to belong. But no-one who lives now has ever lived in the past. How can they claim absolute ownership of a history and culture from a time that they have never themselves experienced?

I decided to ‘inhabit’ this history as it is preserved and presented in British oil paintings.

In all of the early images you are dressed as a woman. Why is this?

It was a way to express my sense of confused identity in an awkward place. I was becoming increasingly aware of the way Western culture perceives Asian men as effeminate and weak. This made me think about my own privilege in the past. In Korea, I grew up in a culture that prioritises men. Before coming to Britain, I never questioned this assumed superiority. Then I realised that cultural supremacy and male supremacy are no different from each other.

I take these traditionally submissive female roles as a form of ironic critique. The character I become in costume is not a woman as such, but simply not a man, just as the ‘Oriental’ is defined negatively as that which is not Western.

But the clothes you wear are of the privileged aristocracy?

That was not my initial intention, I was just expressing my fantasy of the West as seen in oil paintings. It was only later that I realised that this fantasy was mixed up with notions of high status because only the privileged got to be painted in oils. In my imagination the West and power coexisted; but in reality I had found myself powerless.

How did you choose the characters portrayed?

In these early works I was not depicting a specific historical person. The styles reflect British clothing from the thirteenth to nineteenth centuries. By placing myself in these clothes and historical contexts, I wanted to express the sense of cultural awkwardness I felt as an Asian man in modern-day Britain. In this way I wanted to raise the question of who determines the standards of difference and discrimination.

Did the next phase, ‘Fairy Tales’, extend your earlier ideas or take a new direction?

This was an attempt to find the source of my alienation. It seemed to me that the root of cultural prejudice lay first in education: the way history is retold and, indeed, the way myths are passed down. I drew my ideas from seven children’s stories, each having a clear characterisation based on social class. In each case, as it happened, the main character was a woman. It appeared that the feelings I felt as an ‘Oriental’ man in the West were similar to those of a woman in a patriarchy. In each story there is climactic moment that finally resolves to a happy ending. I wanted to capture – to inhabit – that critical moment in the arc of the story.

The next series you created was ‘Punishment Project’.

Yes. In making the ‘Fairy Tales’ project, I became very aware of the word ‘punishment’. Initially this was a vague but emotionally charged feeling for me. But I began to realise that it was not the phenomenon of external violence that attracted me, but the underlying premise of social power. Punishment ultimately linked people with power to problems of power relationship and it was this insight that guided my visualisation of the punishment project. In this series, I took the roles of powerful figures from British history who were executed by the other powerful people because of a conflict in their relationships.

Are these narratives based on actual historical events?

Yes. I chose seven powerful historical British figures who were each executed. People such as Thomas Cranmer [a Protestant reformer burned as a heretic in 1556 under the order of the Catholic Mary Tudor], Mary Stewart [the Catholic Queen of Scots, beheaded in 1587 as she was perceived as a threat to the protestant Queen Elizabeth], Guy Fawkes [hanged in 1606 for attempting to blow up the Houses of Parliament], and King Charles the First [beheaded in 1649 following the English Civil War]. In order to heighten the critique of power relations, the supporting male characters were performed by women. In each case the victim is the central figure and the person responsible for their execution is represented by only their hand.

What is it you wish to communicate through these images?

I wanted to understand the underlying aspect of human nature that leads to the desire for social power. By exploring the complex and shifting power-relationships in British history, I was pointing to larger questions about the prejudice that emerges in the relationship between different cultures and races. I hoped that, if I could figure out these complex power relationships in human nature, I might be able to understand the more fundamental problem of complex relational situations around ethnicity.

In ‘Witch Hunting’ you bring together the mythology of fairy tales with the impulse to exert power through punishment. How did this series develop your ideas and concerns?

This was the final part of ‘Existing in Costume’. Through it I wanted to illustrate the error of absolute belief that leads to prejudice. The witch hunt in the Western Middle Ages was a way to rationalise the unilateral and violent condemnation of the weak and unconventional by socially dominant groups. Even in our modern society, we have our contemporary forms of ‘witch hunt’ that persecute those seen by the majority as ‘other’. Following the series on fairy tales and on historical punishments, I wanted to explore the ambivalent boundaries between cultural fantasy and cultural prejudice. At the same time, it was an effort to understand my unconscious self and the society in which I was living.

How did you go about structuring this series and why?

The Witch Hunting Project focuses on six crimes for which witches were tried in a court of law and sentenced to be executed – often being burned alive. For each type of crime I created four portraits.

Through this process of visualisation, I wanted to question the definitions of social order and social taboo. The fears that ‘otherness’ stirred up went far beyond rational thinking. The witches’ supposed crimes included such things as flying on a broomstick and making a contract with the devil, actions it would be impossible for the court to prove logically, yet the law nonetheless condemned them.

In the process of creating and performing these image stories, what have you learned about yourself and yourself in the world?

I think what was initially important was my passion to make art and the sense of elation that I get from the visual. Art creates value, and its value is shaped by the artist’s worldview and sensibility. It is the life-choice of the artist to create this value with the purpose of communicating it to the wider public. This value-production and attitude to life has made me constantly reflect upon and challenge my own understanding. Through my work, I have tried to understand my relationship with Western society from various angles. In this process, my worldview has expanded. My artistic practice has taught me that what I want to understand has become more diverse.

This interview is a Talking Pictures original.

This site uses Akismet to reduce spam. Learn how your comment data is processed.

Begin typing your search above and press return to search. Press Esc to cancel.