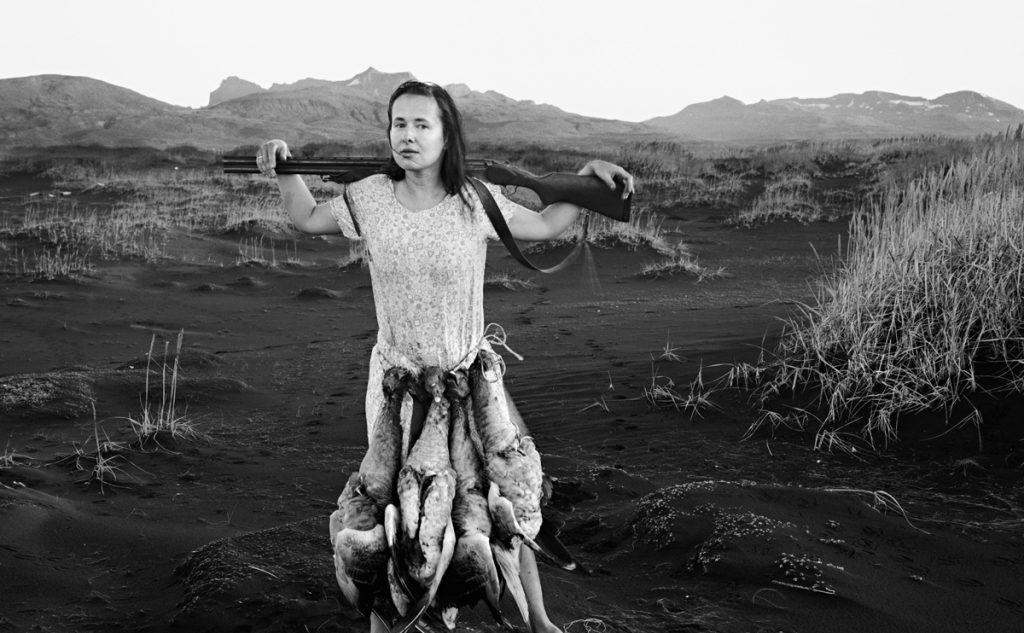 © Agnieszka Sosnowska ‘Self Portrait with my Belt’ Heradssandur, Iceland [detail] 2011 from the series ‘In My Backyard’

My most successful images are the ones in which I really ‘listen’ to what the place is telling me.

For millennia, philosophers from Socrates to Lao Tzu have pondered the question of what it means to live a ‘good life’. In the modern-day West, notions of the ‘good life’ are increasingly associated with leisure, possessions and the pursuit of pleasure. In this, the last of the series of interviews around the concept of compassion, I talk with the artist Agnieszka Sosnowska who left the USA to live in a small farming community in the East of Iceland. Remote, with a harsh and unpredictable climate, it is a place of few comforts and much toil.  Yet it is here that she has found fulfilment, counting it a privilege to live among this small, resilient community where she works as a schoolteacher.

Agnieszka Sosnowska makes images that tell stories, that speak of lives extending beyond the frame of the image and into the landscape. They create a kind of latter-day mythology that distils the essence of place into an action, a gesture, a pose or a facial expression. In many images the artist herself is the protagonist, in others she photographs her students. At the heart of these images is a quality that is closely associated with compassion: mutuality. Experiences that, however demanding, are shared. The solidarity of community. The constancy of friendship. If compassion is a sensitivity to the suffering of others and the motivation to alleviate that suffering, then mutuality is the network of compassion that binds a community together. To be a farmer in such uncertain conditions requires considerable fortitude. Agnieszka Sosnowska describes this determination as something noble that, as a woman and as an artist, she interprets in a primal and sensual way. For this is the mystery that lends to life the quality of myth, of a story liberated from the present moment to speak of an enduring landscape and the people who dwell there.

Did moving to live in Iceland change the way you make photographs?

Icelanders do not plan too far in advance. Living in a place where volcanic eruptions and earthquakes are pretty much commonplace puts a whole new perspective on planning. For six months of the year we have little daylight, winds can be extreme, driving conditions hazardous. I have never been more awestruck or humbled by nature than in Iceland.

Here, I have learned to live ‘in the moment’, to respond to the present. I like to take my camera with me everywhere because I never know what will come up. Here, it is the environment that dictates whether or not I can take a picture.

How do you go about making work?

A picture often beings with the ‘where’ – it’s the ‘if’ that is not yet decided. What if I stood here? What if I looked this way? What if I held this object…? I would compare this process to that of a writer or an actor. I arrive at a place and for me the story is already written by the location. It is the clothing I wear and the objects I choose to accompany me that help complete that story. I find my most successful images are the ones in which I really ‘listen’ to what the place is telling me.

It is important that I am believable in the photograph… in that moment. Because no matter how surreal the image is, I want the viewer to believe this could actually happen.

Your series ‘In My Back Yard’, revolves around life in a farming community in Eastern Iceland. What is it that defines this community for you?

The people in the East are particularly resilient. To be a farmer in this day and age you have to be a gambler. The climate is unpredictable – too much rain or too cold or too dry – and can devastate a farm’s livelihood. This summer was particular cold and dry in the East. You could see and feel our neighbours’ stress.

I have heard stories, almost mythical, of what people here have done in order to survive from day-to-day. I think this resilience and self-reliance has influenced how I see the people I photograph.

Many of your photographs are self-portraits. When did you begin these?

I started taking photographs of myself when I was nineteen years old, straight out of high school. Now I am forty-nine years old and I am still taking them.

Have these changed over the years?

In my youth I made very romantic vignettes, I even found it difficult to include my face in an image. Now I’ve become more accepting of my surroundings and comfortable as a woman in front of the camera. I am interested in more mature stories of becoming a woman.

As an example, can you tell me about the image of you with the dead birds tied around your waist?

It was based on a story my husband told me. He had been hunting ptarmigan in the highlands. He had shot so many that his pockets, backpack, and coat were overflowing with his kill. I had tried to ‘tell his story’ for years, but he wouldn’t pose for a portrait…

We wanted to have children and had been though many cycles of IVF. It didn’t work. I took this photograph while this was happening. I kind of felt like an American baseball player at the plate. You get just so many strikes and then you’re out of the game.

You are a schoolteacher. The series ‘A Yearbook’ captures the children you teach as they grow up and begin to experience life. What is it you seek to bring out in the images?

I had grown tired of making the self-portraits. When I started photographing the students fifteen years ago, I was only trying to exercise my eye. I do not have children of my own and when I look at these photographs now, I feel that they have become like a family album. I have watched students grow from first grade to high school graduation. Many are now adults. I have witnessed their love, grief, excitement, and struggles. I have come to realise the immense influence a teacher can have in a young person’s life.

Are young people in Iceland different from those you knew back in the USA?

The major difference I see is in the male students. Boys in Iceland are taught to knit. Here it is not shameful for a boy to cry in front of others. Men and young boys are far more sensitive in a healthy way. They are not encouraged to be tough and hide their emotions. Compared to USA, I find that the stereotypical roles of male and female in Iceland are reversed.

How did your series of narrative self-portraits come about?

I am often asked why I have chosen to live in Iceland. My reasons range from the rural lifestyle, a good job, the natural beauty, but mostly my answer settles on the quality of Icelandic women. Women’s rights in Iceland are celebrated. Women stick together here and support one another. In my eyes, the female spirit in Iceland encompasses strength and community, and a sureness of who they are. This strength has served as an inspiration in my life as an immigrant in this land I now call my home.

There is an old Icelandic song that tells the tale of a woman haunted by the death of her newborn child. Throughout Iceland’s history, if a woman bore a child in circumstances that her family, friends or society would judge shameful or if she were unable to feed the infant… When faced with such choices these women would leave their newborn out in the wilderness to die of exposure. The song tells of a woman haunted by the voice of her abandoned child and driven to madness by what she had done. I cannot imagine the grief that would consume such women.

I am unable to bear children. This painful fact has affected my sensibility. In a way, I connect with these Icelandic women and their sacrifices.

How do Icelandic viewers respond to your images?

During and after my exhibition at the National Museum the responses were positive. My husband recently told me that he knew of people that cried when they saw the photographs. He refused to reveal who. I was a bit startled by this revelation.

Are these self-portraits, or are you performing an everywoman role.

I am taking my everyday life and trying to make sense of it with the camera. Many times I am acting out something that has happened in my relationships. Sometimes I am responding to what is happening at the time.

I am rather impulsive when I make self-portraits. If I get the urge, I make a picture. I search out objects or places of interest. Years ago it was geese and reindeer. Recently it is axes and knives. The reason is that my husband has started a blade-sharpening business as a hobby. He’s very good at it! He’ll spend hours studying blades and industrial saws. So his newfound interest has become my ‘puzzle’. How can I create a visual narrative around these objects? I spent this summer photographing him alone, and then myself, with these objects.

I was intrigued by ‘My Reflection. Fremrasel’ (2018), which seems like a moment in a larger drama.

This is an abandoned farmhouse my husband and I visit in winter. You have to cross large areas of boggy heath to reach it, so it is easier to get there when the earth is frozen. We love this place. Everywhere the paint is peeling off the walls… In 2016, I had left my husband and filed for divorce. I didn’t come back for about one and half years. I took this self-portrait just after I had returned to Iceland.

What have you learned in the process of making photographs in Iceland?

I am stronger as a woman. I am growing and learning as an artist. I have found my tribe!

Agnieszka Sosnowska was born in Warsaw, Poland, in 1971, and grew up in Boston, Massachusetts, USA. She has a Bachelor of Fine Art in photography from Massachusetts College of Art  (1995) and a Master of Fine from Boston University (1999). She has received several prestigious awards including a Fulbright Fellowship (1996–1997) and winner of the LensCulture Visual Storytelling Awards (2015). Her work has featured in a number of solo and group exhibitions in Iceland, the USA and Israel, including a solo exhibition in the National Museum of Iceland (2019). She has lived and worked in Eastern Iceland since 2005.

This article was initially published in Chinese, in the December 2020 issue of PhotoWorld magazine, Beijing. The theme for the year was Compassion.

This site uses Akismet to reduce spam. Learn how your comment data is processed.

Begin typing your search above and press return to search. Press Esc to cancel.